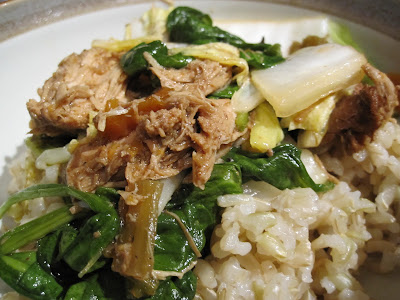 I know it's boring to just read weekly menus with no recipes or recipe reviews so I will start (or try) to post recipes of our meals (if we don't succumb to temptation and go out somewhere).

Sunday is the start of a new menu week, and tonight's meal is a variation on Chicken Adobo. I think I've only had this dish once (at a food court), and with all the variations I've seen online, I had no idea what "authentic" Chicken Adobo should taste like or if the recipe I'm using (Real Simple, February 2011 issue) is anything like the real thing. I subbed in carrots and celery for the onions (this could have drastically affected the flavour), and some napa and spinach in place of the bok choy. I'm trying to make our meals more vegetable-centered, rather than meat, which is why I reduced the amount of chicken to less than half of what the recipe calls for. Japanese cooking (which what I grew up with) mostly uses meat to add flavour dishes, rather than having it be the main thing.

In a 5-to-6 quart slow cooker, combine the onions (or celery and carrots), garlic, vinegar, soy sauce, brown sugar, bay leaf, and 1/4 tsp pepper. Place the chicken on top and sprinkle with the paprika.

Cook until the chicken and onions (if using) are tender, on low for 7 to 8 hours or on high for 4 to 5 hours.

Cook rice according to instructions.

Ten minutes before serving, if the slow cooker is on the low setting, turn it to high. Gently fold the bok choy (or spinach and napa) into the chicken and cook, covered until tender, 3 to 5 minutes. Serve with the rice and sprinkle with the scallions.

The verdict: Pulled chicken-like consistency in a tangy (soupy) sauce. I put the carrots and celery in at the beginning, which tasted fine, but as you can imagine, ended up pretty mushy. You see, here's the thing. I love the taste and flavour onions add to dishes, but not the long, stringy, slimy things that end up in my food when I cook them. If I do use them, I usually chop them up very finely so they blend in well with whatever it is I'm making. Since Adobo sauce is quite thin in consistency, I knew I would end up with that stringy, slimy stuff. I knew the chicken needed something to "sit" on in the crockpot. Enter the carrot and celery.

Next time I make this, I will add maybe half an onion, finely diced, place the chicken on top, and then definitely add the carrot 30 minutes before time's up, the celery 15 minutes before, and then the bok choy or napa or whatever it is, 5 minutes before (as per original recipe). Also, the spinach, while tasting lovely, did not make this dish look very pretty. If you've got eaters who are nit-pickers on presentation, you may want to reconsider... 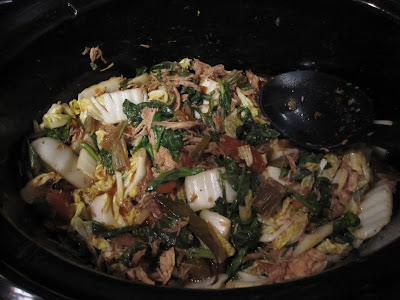 As for this week's menu, here it is:

Sunday: B-a kiwi and a banana (I had an early morning thing), 2nd B (after the thing)-1 over-easy egg, hash browns, and 2 pieces of bacon (at a restaurant); L-full from 2nd B so had a banana, mango, and cashew milk smoothie; D-Chicken Adobo on brown rice.

Friday: B-Oatmeal; L-Chicken salad on crackers; D-Out for dinner at a restaurant but we're having Peking Duck for sure!