"Korea for a week? Isn't that kind of long?" The answer is no.

My very good friend "R" and I had planned to meet up for Japanese winter break somewhere
fun and decided Korea was the answer. We'd booked our flights, our accommodations and then it hit. A big, ugly cold and fever to boot. I had to go into work the day before I left and basically everyone told me I looked like sh*t without using those actual words. My Head Teacher went out and bought me juice, fruits and light foods so that I would actually eat something. My dear coworker D draped his coat over me to keep me warm. My assistant manager J brought me hot tea. The only person who refused to acknowledge I was sick was my manager, M.

After getting a lot of flack from the rest of the staff, M decided to let me go home. I was due at the airport (about a 2 hour train ride away) very early the next day so my wonderful Head Teacher Y offered to at least drive me to the bus station where I could sit on a warm but for the whole ride rather than a drafty train where I'd have to get off a few times to change trains.

I stayed the night at Y's while she made me drink all kinds of hot fluids to help ease the discomfort of the cold as much as she could. She also gave me some kind of Japanese energy drink saying, "don't get into the habit of drinking these, they're really strong. But I really think you need it this time!"

I managed to get myself on the plane and from the airport, onto a bus to the hostel where I was meeting R.

Prior to this trip, the only Korean food I'd had was BBQ. I was blown away but how flavourful everything is! Loved every bite! Full of ginger, chili and awesome broths, my cold and flu were gone after a few meals! Kimchi fried rice, rice cake in soup, bottomless banchan, sesame oil anything, yum!

These are some meals we had in the Insadong area: 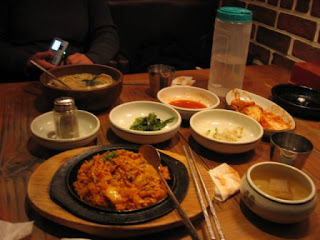 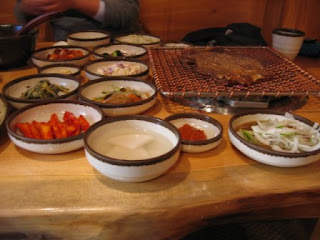 R and I took in some mandatory sights like the palaces... 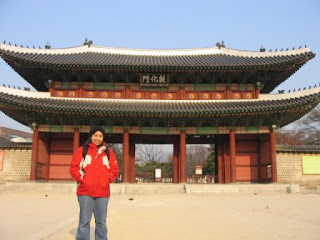 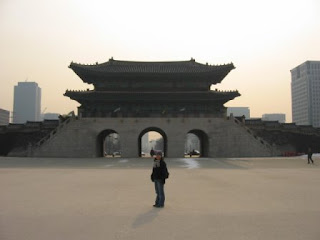 We took a day-trip out to a traditional-looking village near Seoul where kids had fun "playing" with traditional forms of punishment: 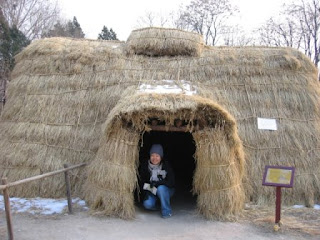 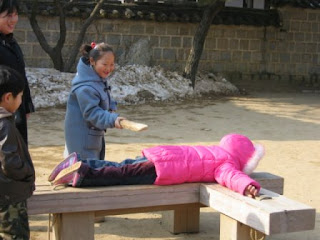 I don't know if sliding on ice, pushing yourself around with 2 pointy things is a traditional Korean activity but it sure was fun! (Even if the ice was broken in a few places...) 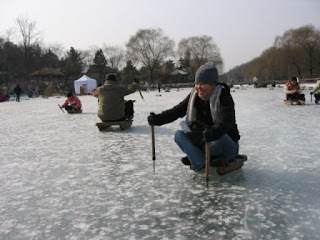 This is a train station at the DMZ (De-militarized zone) where they hope one day, there will be a train that will link the two Koreas. There was a timetable of the trains and everything! 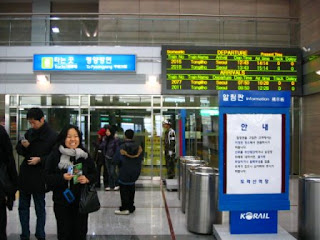 New Year's Eve: A bottle of soju and riot police... 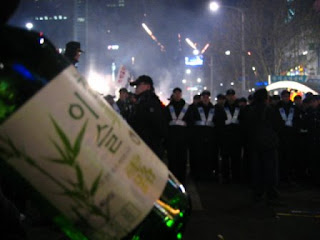 Oh, we knew something was going down on New Year's but had no idea where. We asked a waitress at the restaurant we had dinner (again, in Insadong) and she point to these 2 girls and says, "follow them". So we followed the 2 nice girls and got to the city center (or was it city hall?) for roman candles. People kept handing me lit roman candles and I tried my best to keep it as upright as possible. The streets were packed like crazy and I was so worried I'd lose R in the crowds. I think I was screaming her name a lot because people in the crowds very kindly made way for us as we clung to each other to get home. Despite all the soju and sprite I drank, I felt fine the morning after. R had very nicely fastened a plastic bag to the side of my bed in case I got sick. Now that's a true friend :) Oh, the jacket and scarf I wore on NYE suffered a lot of burn marks and holes. Soju and roman candles do not mix. Actually, I don't think roman candles should mix with anything...
Posted by Chikarakobu at 8:15 PM