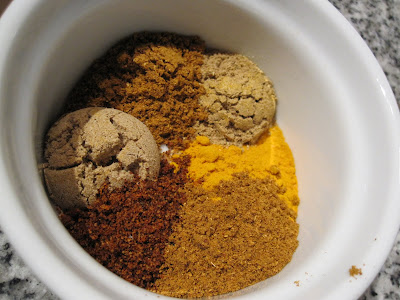 I'm a sucker for a good deal. Especially when it comes to food. I will buy 10 avocados when I only need 2, if it saves me a few measly cents. When I saw a whole, wild caught salmon at Uwajimaya for $4.99/pound, I knew I had to get it the whole thing. $25 for a five-pound fish! I knew it would make at least four meals for us. Fortunately, the fish monger cut it up into four large fillets. One fillet is enough for the husband and I, plus a bit leftover for his lunch.

I'm also a sucker for freezing food. As soon as I got home, those fillets were tightly wrapped in plastic wrap and placed in the freezer. I've used three out of four fillets so far. The first one was poached in a green curry and coconut milk sauce, the second one was baked after being marinated in a soy, garlic, ginger mixture. Although both of those were quite good, the third time was the charm. I got the idea from Route 79. I only ended up using half of the spice mixture, and I added some garlic ginger paste I made and keep in the freezer.

When it comes to salmon, I'm usually hesitant to use anything more than salt, pepper and lemon because salmon already packs enough flavour on its own. I'm usually afraid that using too many spices will cover up the awesome richness of the fish. Fortunately, these spices didn't overpower the salmon at all. The outside had a nice fragrant flavour, but the inside was still salmon-y, even though I let it sit in the marinade for about 2 hours. 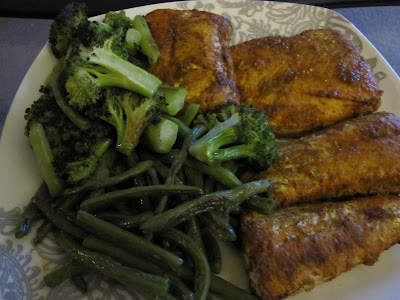 Paired with brown rice and roasted green beans and broccoli, this made a great dinner for us. Route 79 pan-fried the salmon, but I baked mine in the oven at 475 F for 12 minutes.

Pat fillet dry with a paper towel. Season with salt. Place in a shallow dish (like a pyrex) and drizzle with oil. Sprinkle spices evenly over the fish (I only ended up using about half of the spice mix), and using your hands, flip the fish over and move around the dish so that the spices and oil create a paste and coat the fish evenly.

Place the pieces skin-side up in the marinade, cover tightly with plastic wrap, and refrigerate for 1-2 hours. 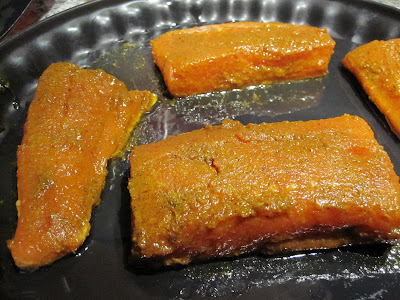 Preheat the oven to 475 F. Place the fish pieces skin-side down on a lightly greased baking sheet. Bake for 12 minutes. Remove fish from pan, and place on paper towels to absorb the oil.
Posted by Chikarakobu at 9:31 PM