Jerk Chicken Chili-Soup in the Crockpot 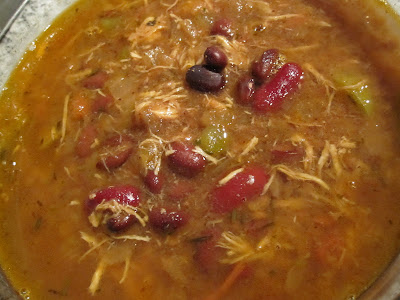 This chili-soup, (I added the -soup part because I didn't add any cornstarch to thicken it. I don't mind it being soupy at all) is surprisingly warming on these chilly November days, considering Jerk is a Caribbean flavoring. The husband and I started taking off our sweatshirts as we tucked into this soup, as the chili-like flavors heated up our cores. The rich smell of cinnamon will fill your kitchen throughout the day, as this soup simmers away in the crockpot.

The soup looks watery at first, but once the chicken is shredded, it definitely thickens up. Because the chicken cooked in the crockpot, it comes apart very easily with a squish of the ladle. You could also take the chicken out and shred with 2 forks but I found that the chicken was falling apart so much as I tried to pick the pieces out, that I just stopped trying. I used water instead of chicken broth and I found the soup to be well-flavored. I've had a few over-salting incidents recently, so I decided with this one, to leave the salt out completely, and just add as much or as little salt as we like at the table.

I made some changes to this recipe to fit what I had in the kitchen. One major change is that I put a raw chicken breast and thigh in the crockpot. I know some people are hesitant to do this, as the chicken will stay at a low temperature for a long period of time. I'm not one to worry too much about that, so this truly is your judgment call. The original recipe suggests using a rotisserie chicken, shredded of its meat but I kind of thought it was a waste to go out and buy a rotisserie chicken, just to rip meat off of it and put it in a soup. I would have rather used the seasoned chicken to make sandwiches or Vietnamese-style salad rolls.

I also used 3 fresh tomatoes instead of a can of diced ones. I had three ripe ones sitting on the counter so that was a no-brainer. For the beans, I just used what I had in the pantry. I've added my changes in parenthesis.

We found this soup to be quite mild. It could definitely be kicked up with cayenne or more jalapenos! It's the perfect winter dish, which will definitely be made again!! 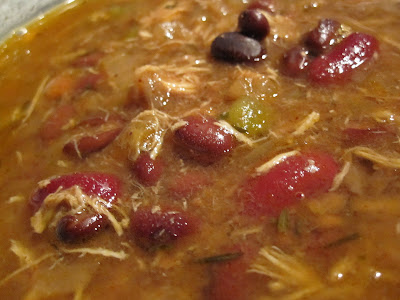 1. Heat oil in a large pot over medium-high heat.
2. Add onion and bell pepper and cook, stirring until softened, about 5 minutes.
3. Add chili powder, thyme, cinnamon, and allspice. Cook, stirring constantly, until fragrant, about 1 minute.
4. Add chicken and stir to coat with spices. Add broth, tomatoes, beans, and jalapenos, bring to a boil, cover partially, reduce heat, and simmer to blend flavors, about 20 minutes.
5. Stir in garlic, cilantro, chocolate, and either cornmeal or cornstarch/water slurry if desired. If you add the cornstarch slurry, bring the heat up to medium-high and allow the chili to thicken. Turn off the heat and let stand for 5 to 10 minutes before serving.

Here are my directions: 1. Add all ingredients except the chocolate and cilantro to the crockpot. Stir well and set to low and cook for 7 hours. 2. After 7 hours, add chocolate and stir to make sure it has all melted. 3. Ladle into bowls and garnish with cilantro.
Posted by Chikarakobu at 7:45 PM