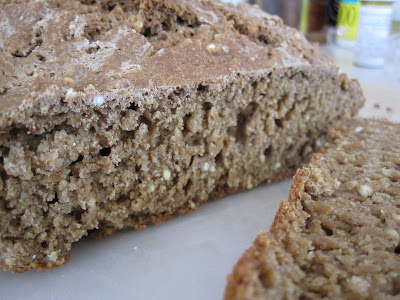 I halved the recipe and baked it in a 9x5 pan, and it made a pretty flat loaf.

The availability of non-wheat flours has really improved over the years. I remember having a friend in high school who had a wheat allergy, and how she had to go to specialty stores just to get bread. Although I can easily buy wheat-free bread, the price is pretty steep. I don't know if making it yourself is that much cheaper but hey, at least it's fresh.

I like this recipe because there is no yeast, and you can use a more natural sweetener like molasses or honey, and best of all, it only calls for about a tablespoon for 2 loaves.

I do still long for wheat breads like baguette, foccacia, rolls, pizza dough and just plain ol' sandwich bread. Unfortunately, this spelt bread is nothing like any of them, but as long as I can't eat wheat, I don't really have a choice. I do however, think this bread tastes better than some of the stuff they sell in stores. I'm really glad I found this recipe by Jean Roberts. 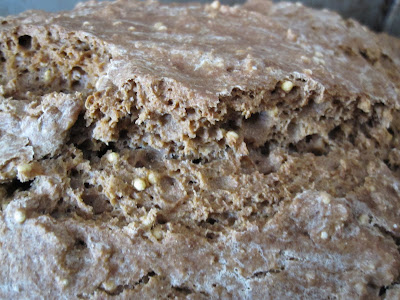 Instead sesame seeds, I used millet, which you can see peeking out from the crack.


This loaf has a thick, hard crust, and the bread itself is quite dense. It was really hard for me to cut through but that seems to be the case with most wheat-free breads. I won't be able to use this bread to make sandwiches but I think I'll top it with stuff (pesto and chicken) and have it open-faced. Maybe sprinkle a little goat cheese on top and put it in the toaster? I'm curious to see how it would taste if I made french toast with it. Maybe the milk/egg mixture would soften the crust up a bit? 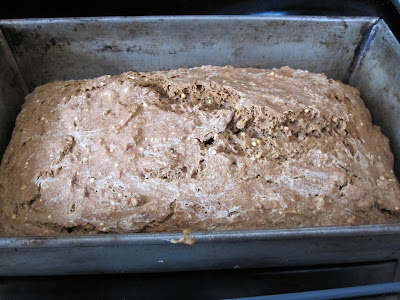 
From Jean Roberts on All Recipes. (makes 2 loaves). I halved the recipe to make 1 loaf.

Posted by Chikarakobu at 6:39 PM