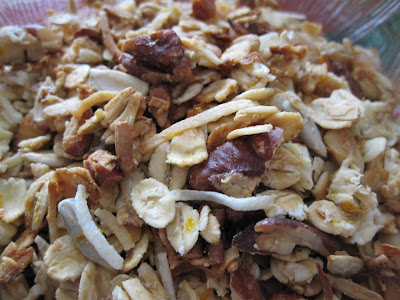 For the past 2 years, I've replaced toast, bagels, and cereal with oatmeal. Oatmeal has been my breakfast almost everyday. There are days I love its simple taste, and others where it's the last thing I want to eat. The latter puts me at risk of stopping by a cafe on the way to work to grab a fatty muffin or worse.

I've often substituted cereal on those days but I really noticed the sugar content, and the price of so-called "healthy cereals" to be pretty high. Even if it uses cane sugar or some other natural sweetener, it's still sugar, and I'm not too crazy about having the first thing to enter my tummy be too sugary.

Enter Heidi Swanson's Grain-ola. It's simple, and with a slight tweak, I reduced the 3/4 cup of honey to 1 tablespoon, added a bit of maple syrup, and one grated apple. It just came out of the oven and it smells amazing. I couldn't resist and poured some cold soy milk over a bowl while it was still warm. Yum! The fragrant orange zest helps to make it seem sweeter than it actually is.

Oh, and I have a confession here... I don't like dried fruit. I'll eat it if it's already in something but it's not something I reach for. I don't know if it's the chewiness or the shrivelly factor but it just doesn't really appeal to me. Want to hear something worse? It's the unsulfured kind that just looks awful to me. Brown and wrinkly stuff? No thanks!

Back when I made my Homemade Oat Treats, I had to cut the dried fruit really small. I've left all the dried fruit out of this one (except for the coconut) so I can add fresh fruit if I want. 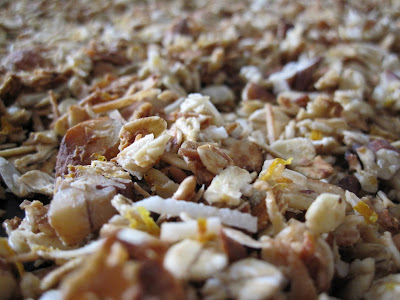 Preheat the oven to 300F and set aside 2 rimmed baking sheets.

Combine the oats, sunflower seeds, nuts, coconut, dried fruit (if using) and zest in a bowl. (Toss and use a sturdy spatula to make sure the zest is evenly distributed throughout the mix).

Heat the honey (maple syrup and grated apple if using) over low heat (until it bubbles slightly). Whisk to thoroughly combine, then pour over the oat mixture and stir until everything is well coated.

Divide the mixture between the baking sheets and spread into a thin layer. Bake stirring every 10 minutes for about *40 minutes, until golden brown. Cool completely, then store in an airtight container at room temperature.

*In my oven, the grain-ola started to brown after 30 so be sure to keep an eye on it.
Posted by Chikarakobu at 1:16 PM