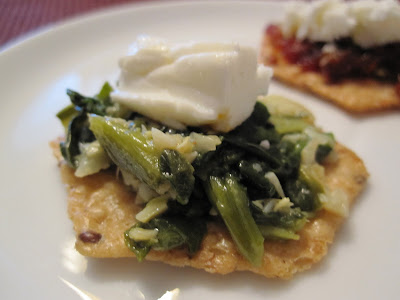 I wanted another dip or spread to have with the sun-dried tomato jam for a light lunch. I had a big jar of marinated artichoke hearts in the fridge so decided to base it off of that. I used to make spinach and artichoke dip but that was laden with mayo, sour cream and of course, cow's milk mozzarella. I wanted something my dairy-free, egg-free sister could have so that was out of the question.

I really like the combination of spinach and artichoke so I thought of substitutes for the mayo and dairy add-ins. I came up blank. Sometimes, it's better to just leave it as simple as possible, and that's what happened here.

Spinach and Artichoke Spread with Feta

In a saucepan, bring salted water to a rapid boil. Add chopped frozen spinach and cook according to package instructions.
In a food processor (or by hand) coarsely chop the artichoke hearts.
Drain spinach, and squeeze out as much of the water as you can.
In a bowl, combine the spinach, artichoke hearts, marinade, salt and pepper.

Heat the spread (either in the microwave or oven) and drizzle with olive oil.
Serve on bread or crackers, and with feta.

I know "some feta" is really not helpful but it really depends on how much you like feta. If you like it a lot, use a lot. If not, then whatever. You could even crumble the feta into the spread before heating it up, but I wanted to give people the option of adding the feta to their bread/cracker or not.

I think this spread could also be tossed with hot pasta (with some additional olive oil) as well. My sister was able to enjoy this spread and the rest of us cut various-sized chunks of feta cheese to have with ours.
Posted by Chikarakobu at 3:33 PM