The hubs and I have been keeping a particular bottle of wine for a special weekend. By special, I don't mean an anniversary or birthday but a weekend where we have no plans, can start drinking early in the evening so we can enjoy the sunset, and can have enough time to make some food to go well with the wine.

This wine was described to us as a "big, chewy red" (see my earlier post titled, "The Wines of King County" for details) and I really don't know enough fancy shmancy wine lingo to describe it. It definitely had a full flavour with enough acidity to make your mouth water a little while you held it in your mouth.

I can truly say that I researched high and low for what would go well with this special wine. I know what you're thinking, "easy, some cheese and crusty french bread!" Well yeah, but what if we don't eat wheat or cow products? "Ohhhhh... well that makes a big difference!"

The one with the black wax (?) is manchego, and the one that is diced finely is the pecorino romano. 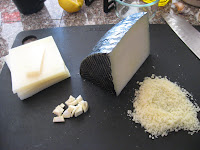 Have no fear, we found 2 sheep's milk cheeses: pecorino romano, and manchego. Here was our menu for our much anticipated night with Matthews Estate 2005 Claret: 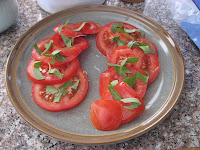 The tomatoes should be self explanatory! We used 2 medium sized vine-ripened ones.

For the grilled mushrooms and bell peppers, I brushed them with olive oil, seasoned them with salt, and sprinkled a bit of balsamic vinegar on them. We used them on the George Foreman because our BBQ wasn't working (boo!) so if you can BBQ them, do it until all the liquid evaporates from the mushrooms.

For the pasta, it didn't quite work as planned. We used rice spaghetti and the water we cooked it in got really sludgy, and so the spaghetti was pretty sludgy. I rinsed it with cold water to wash the sludge off but now the pasta was cold! The idea was for the hot pasta to warm the olive tapenade and melt the pecorino romano a little. Not ours. It just sat there looking cold so I threw it in a frying pan to heat it up a bit. After it heated up, it was delicious!

If you're using wheat pasta, you won't have this problem so cook as much pasta as you need, drain and while still hot, toss it with olive oil, a few tablespoons of olive tapenade, and as much or as little pecorino romano (or similar cheese like parmesan) and let stand for a few minutes while the cheese softens and melts.

Of all out dishes, I though the tomato/fresh basil/manchego went best with the Claret, but the Hubs thought the pasta paired best.

Sorry for the unspecific quantities for the dishes, but just keep tasting adn testing until you get the level of saltiness you like!
Posted by Chikarakobu at 8:51 PM